Enter Your Recording needs & We’ll get you a camera

We make it simple to record your game footage.

Reserve a camera and we ship it to you.

Put the camera on the tripod and click start on your phone to record.

He shares his experience with the camera and the rental process.

Congrats to the Champs

Using one of our cameras doesn’t mean you’ll win a championship but the footage you capture can be used to help your team improve.

These families and teams were great to work with, thanks for their kinds words.

Working with Easy Soccer Video was exactly that… Easy. Ben is a wealth of information about the Veo ecosystem and makes renting and videoing sporting events with his Veo cameras a breeze. If you want a hassle free way to record your team’s games and don’t want to make the investment of a Veo purchase yourself, we highly reccomend the service of Easy Soccer Video!

Our experience renting the Veo cam from Easy Soccer Video could not have been better. The instructions were super simple, the shipping was 100% easy and the Veo camera itself is amazing. Highly recommended!

If you’re thinking of renting a Veo camera, I would absolutely give Easy Soccer Video a call. The entire process was easy and the camera footage turned out great. Ben was extremely helpful with our camera rental. He setup our account and walked us through the entire process. We were very satisfied with the entire experience. If you are looking for the best game or practice footage, give Ben a call!

When we needed a last minute solution to film an out of town tournament easy soccer video bent over backwards to help us out. Ben even drove across town to help deliver equipment and shipped another item to our team hotel in Phoenix. It’s that type of customer service that will make us repeast customers, especially when it comes to our next out of town tournament.

We’ve worked with almost 100 teams and families. These are some of the questions we typically discuss when they call to chat about recording their games.

How fast can I get a camera?

As quickly as you need one. To ensure you have one in time we recommend booking a week in advance.

Do you ship to my town?

Yes, we can get you a camera if you’re in the continental U.S. See the map below for a list of places our cameras have recorded so far.

How much is shipping?

Shipping to you is included in the rental rate. We ship the camera UPS Ground or FedEx Ground depending on your location.

We create you an account and you login online to watch and download games and create/download clips.

Can our whole team use the camera?

Sure, once you record a game you can invite all the players to access it. Depending on what you want them to be able to do they can watch the game, download the game, create and download clips.

How many games can I record?

As many as you need.

Do I need a tripod?

Yes. If you don’t have a tripod that reaches at least 12 feet we recommend this one – Impact Heavy Duty Stand 13

Do I need a camera plan through Veo?

No, you use ours through the rental.

What if I’m not good with technology?

We sell a guide called “Veo Rookie” for new camera owners. If you rent one of our cameras we include a copy of this guide you can use to learn all about the camera.

What if I get stuck?

Give us a call or send us a text and we’ll get you sorted out. We’ve supported almost 100 teams around the U.S. recording games over soccer weekends.

How many cameras can I get at once?

As many as we have in stocked that aren’t booked.

How long can I keep the camera for?

Typically families or teams rent a camera for a week or two we’ve worked with teams for a month or a season. Depends on your needs.

What if a game or tournament is cancelled?

If your games are cancelled for reasons out of your control (weather, covid, etc) we just refund your money. This happened quite a bit in 2020 thanks to corona virus. If the cameras are available and you have games the following weekend you can hold onto them and record different games. If no cameras are available we refund your money or if you want to use them at a later date we just reschedule.

There are several ways depending on how you want to use it.

-Invite coaches, parents, players on the team to the game and they can watch/download

-Make it public, then share direct link via social media or email (by default games are private)

How can I get a professional highlight video?

Do I have to operate the camera all game?

No, once you click the start button on your phone the game records on its own so you can sit back and watch.

How does the camera work?

The camera has two lenses, each captures play on one half of the field. After the game you plug the camera into the internet and the camera splices the two videos together and uploads them into the cloud. The software processes the game and does the zooming and panning digitally for you.

What’s in the box that ships to me?

All the equipment ships to you in a protective carrying case. It contains:

-Quick release plate (for the top of your tripod)

What if I break it?

We typically take a security deposit before sending you the camera but for our partners we are waiving this requirement. You can protect the camera in two ways:

1) When on the tripod, put a sandbag on the bottom of the tripod so it does’t blow over in high winds (this would break the camera)

2) When it’s not in use (transport, etc) keep it in the protective carrying case

We have the camera and case labeled so if you misplace it the person finding it can contact us The camera is weather resistant so rain wont bother it. Just don’t submerge in water.

Dropping it on concrete or a hard surface, or from a high distance can damage the lenses or internals so avoid that.

How should I choose which games to record?

To capture footage for highlight videos you really want to record a minimum of 3 games. Tournaments are ideal opportunities to capture a number of games in short period of time. Some things to consider when choosing the games:

–Level of opponent, if you might lose 6-0 you likely won’t have as many highlights. On the flip side if you’re recording for keeper footage and you win 6-0 you might not have many saves.

–Facility rules, some locations won’t allow tripods over 6ft or wont let you put up tripods at all, so those wouldn’t be a good candidate. Wait for games where you can record from an elevated position.

We get the camera to you at least a day before your games begin and you ship it back the first business day after your last game. For example, lets say if you play Friday, Saturday, Sunday.

Thursday – Camera arrives, you test it out.

Friday/Saturday/Sunday – You record game(s). Once they are over you plug the camera into power to charge and also to the internet to upload the games.

Monday – You ship the camera back to us.   Or if you play two weekends in a row you can do a two weekend rental and keep the camera that week and record again the next weekend. In that case you are free to record training sessions or whatever you need during the time you have it.

What if I have more questions?

How do I get started?

You can fill out the reservation request form on this page, or you can give us a call or text at 816-398-8846, or send us an email – veo@easysoccervideo.com 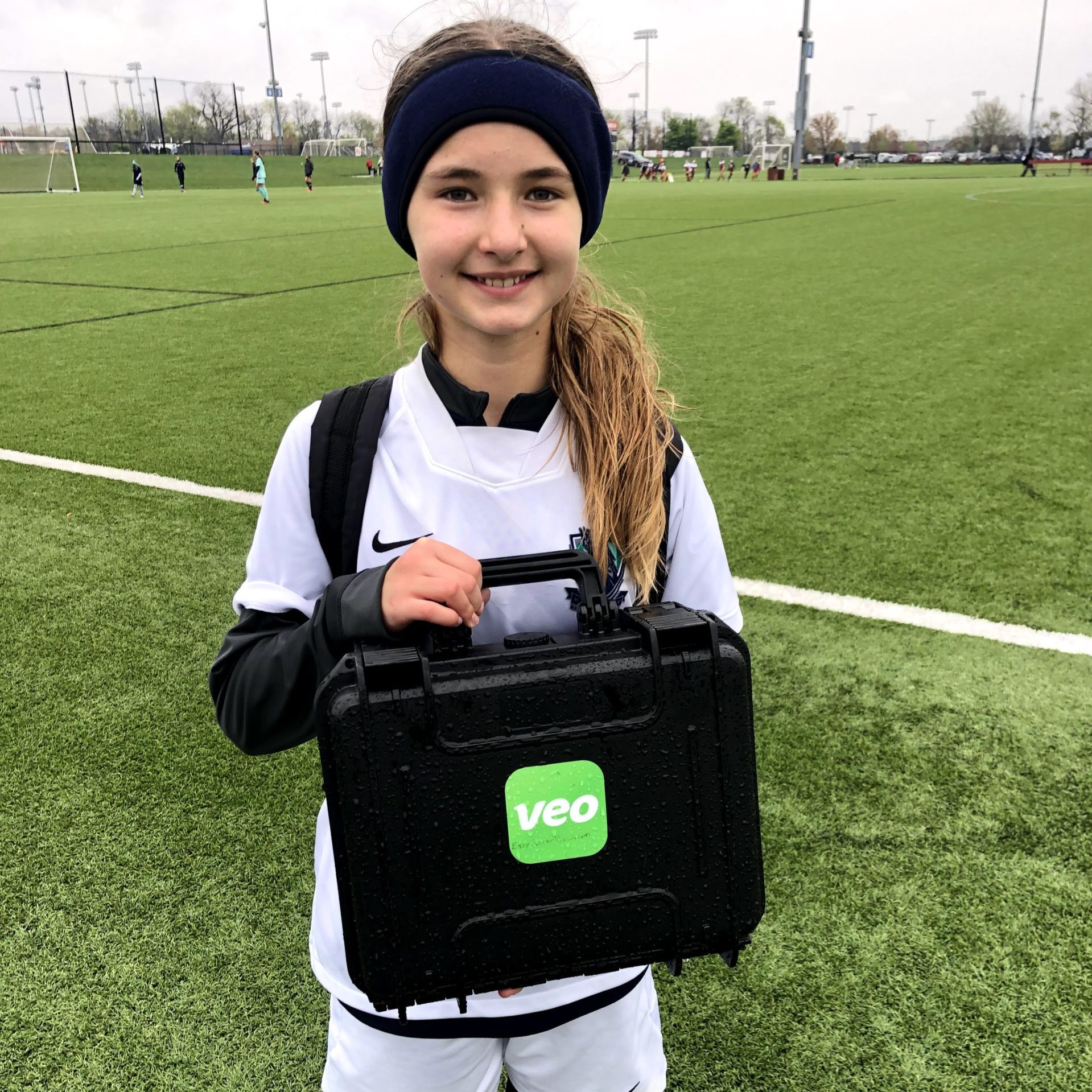